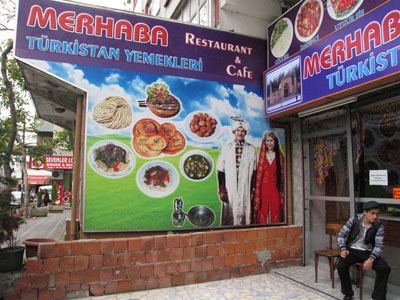 [1]
(Editor’s Note: In almost a decade of intrepid eating in Istanbul, we still miss the immigrant community restaurants we know from the American big cities where language barriers and foreign customs make a lunch into a real adventure. Istanbul has foreign communities and it has foreign restaurants but the two rarely seem to meet. It wasn’t until we visited Zeytinburnu that what we were looking for: Little Uighurstan.)

“Do you hear that?” asked Sean Roberts [2], an expert on Uighur culture and politics and our dining companion for the day. “They’re making the lagman.”

As if inspired by the image of a pizza-maker spinning dough on his finger like a basketball and tossing it in the air, lagman-makers have a similar choreography that includes a deep swing, a flip and a smack of the thick braid of noodles. But unlike pizza dough, lagman noodles have escaped mass production; they are handmade by definition. As fat and chewy as udon at certain points and thin like spaghetti at others, a bowl of lagman is full of surprises. The generous topping of sautéed, finely chopped lamb, fresh red and green peppers that came with the suyru lagman (guyru lagman comes with a more chunky variety of the same ragu) was a delicious and spicy change of pace from the milder Turkish palate.

“This is a good lagman. I’m sweating,” said Roberts.

The location of these thwapping noodles was Zeytinburnu, an Istanbul neighborhood that seems almost as far off of the beaten path as the Silk Road oasis of Kashgar. The last stop on the tramway, it’s a busy little district with a pleasant central pedestrian boulevard lined with that particular style of concrete blocks present throughout all Turkish cities, architectural non sequiturs. At street level on the main drag, it seems this area is all about the trade of leather jackets, much like the shopping streets of Laleli and Aksaray. But look a little closer and you’ll notice banners in Arabic script, blue-and-white star-and-crescent flags in upper level windows, an old-timer with a long stringy beard strolling down the main street in a black velvet skull cap with embroidered totems – the signs of a coherent community of people, the Uighur of Zeytinburnu, who come from a place in Western China described as Eastern Turkistan.

Often idealized in Turkey as the proto-Turks, the Uighur have enjoyed a privileged status since the 1950s and their community in Zeytinburnu has steadily grown since then. Though it’s increasingly difficult to leave China and enter Turkey these days, newcomers still arrive regularly, like the cook at Turkestan Restaurant, who took our order with a bashful smile and not a word of Turkish.

We visited three Uighur restaurants in Zeytinburnu, sampling the large Uighur-style mantı dumplings; somsa, a savory pastry stuffed with lamb; and, of course, lagman. The food was all very good, but it was the scene that captured our attention. We were reminded of tight-knit communities in Queens or the West Bank of New Orleans, where restaurants play a key role in cultural preservation. At one spot, Pan-Turkic newspapers were stacked on one table, while the soft lilt of the Uighur language filtered through a privacy screen where a mother fed her children Kashgar kebab and teenagers gathered around a huge flat-screen to watch a Uighur crooner’s concert DVD. At İpek Yolu, another of the neighborhood’s restaurants, we even met the director of a local Uighur kindergarten.

In Istanbul, foreign communities rarely settle and thrive the way the Uighur have, so foreign restaurants rarely feel – or taste – authentic. But in Zeytinburnu, rest assured, there is a Uighur at the next table keeping the cook honest. The lagman will be as fresh and tasty as it is in Kashgar. And the noodles will always be audibly handmade.