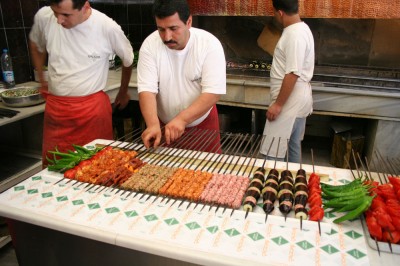 [1]
Editor’s note: In Salih Seçkin Sevinç, creator of the fantastic Turkish-language food blog Harbi Yiyorum [2] (roughly translated as “Eating, For Real” in English), we’ve found a kindred spirit and a source for great eating tips. We’ve asked Salih to share with our readers some of his culinary wisdom and this week we are happy to be able to run a series of his posts about the mind-blowing food scene in Southeast Turkey’s Gaziantep. Take it away, Salih!

Gaziantep, formerly known only as “Antep,” received its “Gazi” moniker (“war veteran” in Turkish) after the city was defended heroically during the First World War. But the city’s real claim to fame is its cuisine, especially its kebab and baklava. In Antep, the locals call every grilled meat dish “kebab.” Among others, there’s ciğer kebap (liver), the classic şiş kebap, patlıcan kebap (eggplant kebab) and Ali Nazik kebap (grilled meat over eggplant purée). Stay there long enough and you might even find they’ve named a kebab after you!

Oh, yes, we forgot! Let’s add lahmacun to this beautiful menu. Antep-style lahmacun means it is always prepared with garlic and it’s always better with garlic. Gaziantep is a heavenly place for meat lovers, a carnival for the stomach and a feast for the eyes. But talking only about meat would be unfair to the desserts that originated here, such as baklava, katmer and kadayıf.

The above items are the most popular ones that should be eaten whenever you visit Gaziantep. If you do not eat these things, your visit to the city could very well be considered invalid.

Okay. What were we talking about? Yes, what else is there to eat in Gaziantep?

As there is a huge corpus over here, we’ll try to make a list: kebab, katmer (a dessert of phyllo dough wrapped around pistachio, buttermilk and sugar), ciğer, baklava, burma kadayıf, beyran (a soup like kelle paça), lahmacun, meyan kökü şerbeti (licorice root juice), dütsuyu (mulberry juice), yuvarlama (an Antep-style soup made with tiny meatballs), içli köfte, ekşili yuvarlak köfte (meatballs in a piquant sauce) and küşleme (a kind of lamb filet, considered “as precious as caviar” by some). Of course we didn’t have enough time to eat all of these things (although we did try most of them).

Gaziantep totally changes the way you eat. This is a place where you can have liver kebab for breakfast. And when you want to eat it at lunch, no sir! You can’t find it. The chef will say: “Go home today and come back tomorrow before 9:30 in the morning.” Can you believe it?

This is your daily nutrition chain in the city. Breakfast: ciğer kebap. Lunch: şiş kebap. Dinner: beyran, lahmacun and again another kind of kebab. If you still have room in your stomach, add some baklava or another dessert to each meal. The truth is that we ate so much over three days in Antep that we almost became sick.

But the other truth is that Gaziantep is a real experience for real eaters. We will take a look at some of the best places to eat in Gaziantep in the coming days.

Up next? Lahmacun and baklava in Gaziantep. Stay tuned.