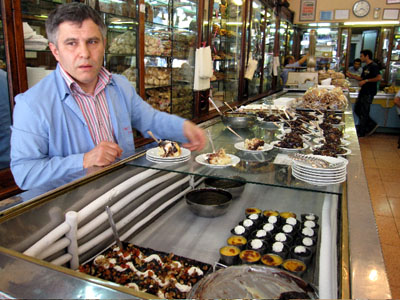 [1]
We’d like to like the profiterole at Inci Pastanesi on Istiklal. And we’d like to believe their claim that the profiterole was invented on the premises in the 1940’s. But we like Inci for non-culinary reasons. This old school Beyoglu pastry shop has been spooning out cream puffs covered in chocolate goop for 70 years with a respect for tradition and a refreshing contempt for the latest trends in interior design. For better or worse, it is an institution.

Today, this culinary landmark is one of the last holdouts in the historic Cercle D’Orient block, defying an eviction notice from one of the most powerful developers in the country. The grand building, which is also home to the recently shuttered Emek cinema, one of the last great movie halls in Istanbul, is slated to become a shopping center. That would put it next door to another shopping mall that rising on Istiklal, which itself is already evolving into a kind of elongated, open-air mall. More shopping vs. Inci’s profiterole? We know where we come out on that one. We only wish the grand poobahs who are in charge of Beyoglu’s “urban transformation” felt the same way we do.

Inci is collecting signatures to save the home of the profiterole, but the staff admits its days are most likely numbered.

Stop in and sign the petition, if not for a profiterole then for what might be a final glimpse of old Beyoglu.