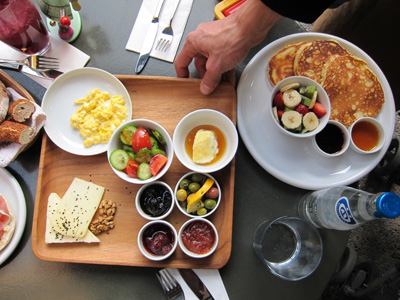 In the recent past, the humble, yet very satisfying classic Turkish breakfast – wedge of feta-like beyaz peynir, a couple of fresh, raw vegetables, some honey, jam, eggs made to order and a pile of fresh bread – has been eclipsed by two competing breakfast trends. One is provided courtesy of the breakfast mafia from the Eastern Turkish city of Van, which has planted a flag in most neighborhoods, serving up a lavish spread, including a few specialties not seen west of the Euphrates. Then there’s the Western-style brunç phenomenon, whose proliferation we credit to the House Café empire, which helped introduce Istanbulites to mimosas and pork-laden Eggs Benedict. For years these two forces have competed for the attention of Istanbul’s avid breakfast-goers, driving a wedge into a society that had up to now generally agreed on the subject of breakfast.