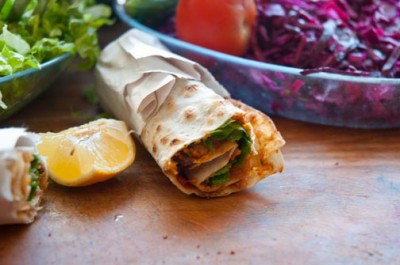 [1]
(Editor’s Note: A recent article [2] about a spat between Turkey and Greek Cyprus over who owns the rights to claim lahmacun as their own got us thinking about those minced-meat covered discs of dough and how, when done right, they really are something worth fighting over. So, prompted by the Turkish-Cypriot food fight, we’ve decided to officially declare this week “Lahmacun Week in Istanbul,” where we’ll be looking at five of our undisputed favorite spots in town to get a taste of how the contested savory delight should be made. We start today with Tophane’s İsmail Kebapçısı, an Istanbul Eats standby.)

Where Beyoğlu slopes down towards the Bosphorus in Tophane, a rough-around-the-edges district named after a nearby Ottoman-era cannon factory, there’s not much in the way of swanky eating. Judging by the great piles of husks on the sidewalk, sunflower seeds are the dietary staple of the neighborhood. Well, that and a spicy flatbread called lahmacun (pronounced lah-ma-joon).

Over at İsmail Kebapçısı, owner İsmail smiles broadly from his post by a blackened stone oven. He’s always got a little dough on him, and at lunchtime he’s making it hand over fist. İsmail grills up mincemeat kebabs and chicken sheesh, but he clearly takes most pleasure in plucking a small handful of dough, dusting it with flour and rolling it out matzo-thin on the marble slab before him. He pats on top of it a fine spread of ground meat, tomato, onion, red pepper paste and spices and then shoves it deep into the hearth with a long paddle. That’s about all there is to a preparing a lahmacun.

There have got to be a dozen other lahmacun makers within a four-block radius of İsmail. You may ask, “Why is this lahmacun different from all other lahmacun?”

“Because I think positively!” İsmail explained one day, twinkling eyes lit by a clear sense of duty.

We’re not inclined to doubt İsmail on that point. Positive thinking goes a long way in the kitchen and the proof is sitting right there on the end of his paddle. (Click here [3] to read the rest of the review)