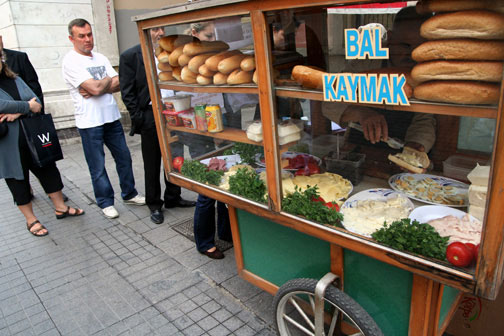 (Editor’s Note: This review originally appeared on May 18, 2009.)
Mehmet Demir may not be one of Istanbul’s better-known restaurateurs, but he certainly is among its shrewdest. In fact, he has the best business plan in town: Demir runs a bustling business that has customers literally lining up in the street to taste his grub, doing so with minimal overhead, zero rent and a staff of two. Of course, working out of a wheeled cart that has no fixed address helps keep costs down (and insures that customers have no place but the street to line up). But it also means that Mehmet can channel all those savings into what he serves, which in this case is a monstrous and delicious breakfast sandwich.

Demir is part of Istanbul’s great food on wheels tradition, with different carts that sell everything from rolls to grilled meatballs making appearances throughout the city at different times of the day, and even according to the seasons. One of our favorite cart snacks can only be had in late spring and summer, when vendors selling peeled and salted cucumbers materialize, only to disappear with the first sign of fall.

Although Demir works from a cart, there’s something more permanent about his operation. For the last 11 years, Demir and his wife Ser have been selling their sandwiches from the same corner off İstiklal Caddesi, the pedestrian-only boulevard that runs down from Taksim Square, starting at 6:30 a.m. and working until about 11 a.m. or until they run out of bread, whichever comes first. The Demirs’ three-wheeled wooden cart is topped with a glass-lined box that holds crusty, bakery-fresh mini loaves on a top shelf, and below that a smorgasbord of breakfast ingredients: feta and string cheese, sliced tomatoes, green peppers, parsley, hard-boiled eggs and some mystery meat he calls “chicken ham.” Most of Demir’s customers – hungry office workers on their way to their jobs – get all of the above crammed into a loaf that first gets treated with a schmear of zesty black olive paste (we prefer to order ours “etsiz,” without the meat). The way all the ingredients work together – the salty tang of the cheese and olive paste, the crunch of the pepper, the coolness of the tomatoes, the freshness of the parsley and the pleasing unctuousness of the egg – makes for something very satisfying. More discerning types, meanwhile, order the “bal kaymak” sandwich, a loaf spread with honey and the dreamy Turkish version of clotted cream – a very fine way to start the day. (For more information, check out this earlier post about kaymak [1].)

A whole sandwich will set you back 3.5 lira, while a half loaf – a mini-bomb that should leave most office workers dazed in their cubicle – costs only 2 lira. So, if you happen to be walking down İstiklal during the week, we suggest you drop by Mehmet Demir’s breakfast cart – even if you’re not on your way to work. Day in and day out, this sandwich shop is on a roll.

Address: corner of İstiklal Caddesi and Deva Çıkmazı (across from the Malatya Pazarı store)
Telephone: No phone