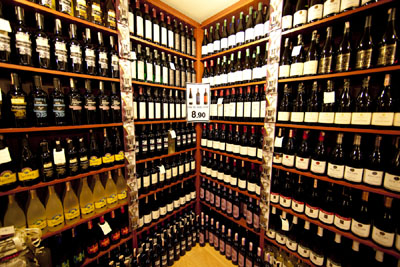 (Editor’s Note: This is the first installment of our new advice column, “Since You Asked,” in which we plan to answer readers’ questions about anything food and drink related in Istanbul (and even beyond). Got a question? Send it in to istanbuleats@gmail.com [1] and we’ll try to answer it in an upcoming column.)

Dear Istanbul Eats: I’ve heard a lot about Turkish food, but what about Turkish drinks? What does one drink with their kebab? With their fish? T. Ippler, Wichita, Kansas

Good question. Actually, even after living in Turkey for several years, we’re still trying to figure a winning strategy for drinking with our meals.

Beer lovers, in most cases, will find their choice mostly limited to “Efes,” an inoffensive Pilsener that dominates the Turkish market with an iron fist. The makers of “Efes” also brew “Gusta,” a wheat beer that offers a nice break from its ubiquitous stable mate. Imported beers with predictable names such as Corona, Beck’s and Heineken can also be found, but don’t expect to come across too many bars or pubs serving anything much more exciting than that.

Fortunately, when it comes to Turkish wine, there is greater choice. Turkey’s wine industry has been experiencing something of a renaissance in recent years, with established wineries improving their quality and several emerging new wineries turning out very good wine. The only caveat – and a significant one – is that drinking good wine in Turkey doesn’t come cheaply.

Still, we’ve been very impressed with some of reds and whites being made by DLC, Corvus and Sarafin. On the cheaper end, the reds and whites produced by the Angora brand tend to be consistent, both in terms of taste and price.

And although wine and beer are gaining in popularity, anise-flavored raki (similar to Greek ouzo and French pastis) is still the undisputed top choice for a drink to accompany meze and fish (and it certainly works with kebab). For years, the dependable “Yeni Raki” brand was pretty much the only choice available meze eaters, although recently new brands are also becoming popular. Raki made by “Efe” are worth seeking out.

Drinking raki, like eating meze, has its own rituals. The liquor is rarely drunk straight. Instead, a shot of raki is mixed tableside with water, turning the drink a milky white. Most raki drinkers will also add ice to their glass. Don’t worry about violating the ritual: In most cases, your waiter will do all of this for you, leaving you with nothing else to do but drink.

Of course, while we’re talking about drinks, it’s worth mentioning that some Turks insist that the best accompaniment to kebab is not anything alcoholic but rather ayran, watered down and salted yogurt, and şalgam, a drink made out of turnips that is essentially spicy pickle juice. Bottoms up!