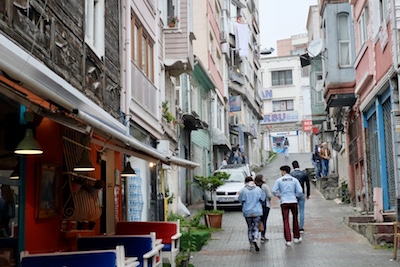 That much of the past seems to stick to Samatya is a marvel in Istanbul, a city being rebuilt and “restored” at an alarming pace.

First, there’s the question of its name. Occupying a stretch of the Marmara Sea and squeezed between the old city walls and Kumkapı, an area home to a rotating cast of eclectic restaurants [1], the neighborhood still goes by its Greek name (Ψαμάθια or psamathia, likely derived from the Greek word psamathos, meaning sand) even though it was rechristened as Kocamustafapaşa after the foundation of the Turkish Republic.

Perhaps more importantly, it’s imbued with a certain type of nostalgia. For many Turks, the neighborhood is best known as the backdrop of İkinci Bahar, a dizi (television series) centered on the lives of a kebab restaurant owner and his female meze cook that aired in the late 1990s and early 2000s. But going back even further, many associate the area with Istanbul’s Armenian population: Armenians were settled in Samatya and neighboring Kumkapı as part of Fatih Sultan Mehmed’s efforts to repopulate the city after his conquest in 1453. Both districts still boast a number of Armenian churches, although it is believed that only around 60,000 Armenians reside in Istanbul today.