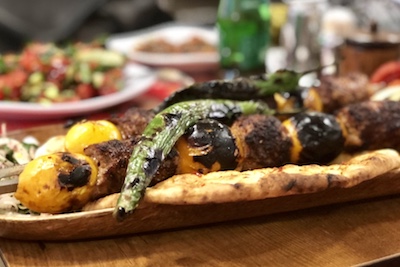 It was the first of April and an absolutely pristine Istanbul spring day, the kind where one can break a slight sweat walking up a hill then catch a cool breeze in a nearby patch of shade. Returning to the city from a lovely weekend on Büyükada [1], we were smitten with spring and wanted to indulge in its finest offerings.

In a fit of hunger-fueled inspiration, we quickly realized what we were craving: yenidünya kebabı. This spring-only affair is a specialty from southeast Turkey’s Gaziantep where chunks of minced beef and/or lamb are skewered in between sections of newly arisen yenidünya, or loquat, diminutive orange fruits that are as tantalizingly tart as they are sweet. The poetically named yenidünya translates into “new world” in Turkish, perhaps an allusion to the fact that the fruit’s arrival coincides with the earth’s revival after its winter slumber.