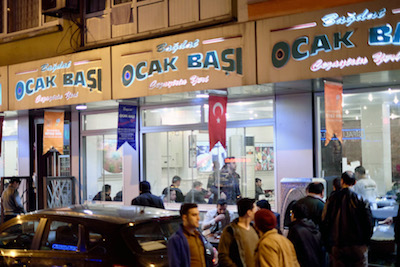 Istanbul’s T1 tramway is relatively pleasant if you can find a seat, but borders on unbearable if you are on your feet.

Back in 2015, we wrote about a trip [1] we took [2] from the line’s first stop all the way to one of its last, which lies way out in the district of Güngören. By the time the tram has made it to this point, it begins to perplexingly share a lane with traffic, voiding the whole point of this type of public transportation.

On one recent weekday evening, we found ourselves standing in a rather contorted position on the beyond-crammed train, a price we were willing to pay for a trip to one of our favorite culinary hotspots. The journey took over an hour. It was well worth it.

Read the rest of the review on Culinary Backstreets [3].