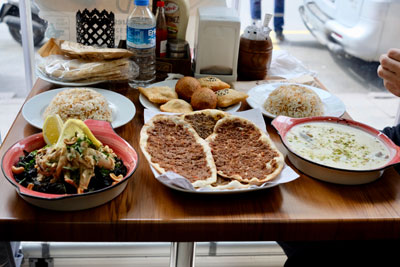 Perhaps nowhere else is it clearer that as many as one million Syrians have settled down in Istanbul than in the city’s historic Fatih district. The neighborhood is home to the city’s immigration headquarters (Fatih Emniyet), and the backstreets leading up to it are among the most transformed, since Syrians and other new arrivals end up spending hours there, often taking multiple trips to the office to get their paperwork in order.

A stroll down the area’s Aksemsettin Caddesi reveals a dwindling number of Turkish markets and a rising number of Syrian ones, a collection of Syrian fast food joints, one Yemeni establishment [1] and one eatery that transports its patrons through time and space, serving up dishes that in the past rarely made an appearance outside of the Syrian home kitchen.