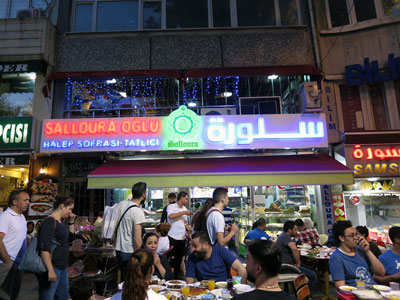 Tucked away in an alley in Istanbul’s Aksaray neighborhood, Şirket Alahdab is a small grocery store overflowing with Syrian staples: pickled baby eggplants, dried leafy greens, cans of clotted cream for desserts. When we enter the store, Istanbul temporarily fades away and Damascus or Aleppo take its place. “All real,” the clerk declares proudly, as he shows off his goods. “Smuggled from Syria.”

The shop is not Aksaray’s lone seller of Syrian culinary goods. Over the last few years, as the violent conflict in Syria has driven millions of Syrians across the border into Turkey, the neighborhood has turned into the city’s “Little Syria.” Throughout the mostly working-class district – some 750 miles from Syria – there are now signs advertising “Syrian shwarma” and “Aleppo cuisine,” spelled out in Turkish and also in the curly, coiled letters of Arabic. Syrian street vendors selling cardamom-spiced coffee and jars of pickled vegetables crowd the sidewalks. Restaurants serving displaced Syrians familiar dishes like fatteh, fried pieces of pita topped with slow-cooked chickpeas and doused in garlic-yogurt-tahini sauce, and muhammara, a spicy spread of roasted red pepper and walnut sweetened with a drizzle of pomegranate syrup, now dominate the main boulevard.