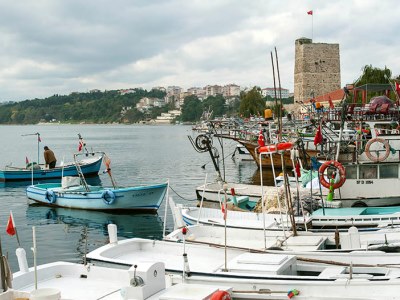 “No hamsi, no money.” Mert Kanal hoses down empty Styrofoam containers and surveys the leftover catch in his market in Sinop, on Turkey’s Black Sea coast. The gulls squawk, fighting over scraps on the dock while fishermen tidy their nets for another night of fishing. The hamsi, or anchovies, are gone for the season, moving up the coast in dwindling numbers as hulking factory ships chase them.

While mackerel, turbot and whiting are all fair game for fishmongers, hamsi holds a special place [2] in Turkish cuisine. Unlike the slimy, salty canned form of the fish reserved for eccentric pizza toppings in North America, anchovies are eaten fresh [3] in Turkey. Lightly battered, quickly fried and served with a slice of lemon, hamsi are gobbled down by the kilo, bones and all.

Fishing still thrives in Sinop, as in ancient times – for countless generations, fisherman here have pointed their personal boats out to sea in search of hamsi. But sadly, that may not be true for much longer. The crumbling old city walls no longer guard an important trade hub along the Black Sea but seemingly serve to contain apartments and vacation rentals from falling into the sea. Most of the traders at the market now only come on Mondays and Thursdays, hauling both produce and clothing. In Sinop’s harbor, dozens of small wooden boats are moored next to giant industrial behemoths painted the colors of their fleet.

“We never used to eat hamsi before the snow, but now it’s different,” said Kanal, a third-generation fishmonger and the owner of the Okyanus Balık Evi (“Ocean Fish House”) restaurant on Sinop’s waterfront.

Read the rest of this feature at Culinary Backstreets [4].