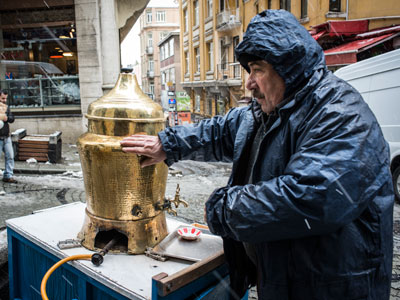 By the name of the place, you’d expect the Sütçüler (“Milkmen” in English) district near Isparta in southern Turkey to be a dairyland paradise, thick on the ground with men carrying buckets sloshing fresh milk, cheese wheels stacked in cool dark sheds, verdant hills freckled with cows. But there are no milkmen in Sütçüler, at least not in the wintertime. The area’s name actually has nothing to do with anything going on in Sütçüler itself.

From a distance, it might seem like these Ispartans are dairymen, providing an important link between city folk and the farms back in the village, but spending some time among those from Sütçüler, we found their most common feature to be their willingness to grind out a living by dragging a pushcart through the streets of Istanbul, winter after winter.

Read the rest of the feature and see the video at Culinary Backstreets [2].