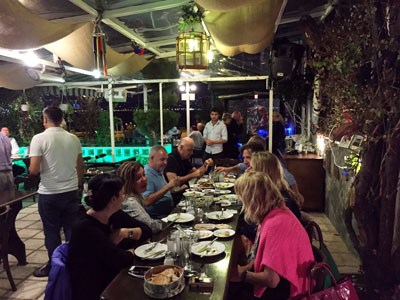 Büyükada has long been a popular destination for İstanbullus seeking a break from harried metropolitan life. With its array of quaint köşkler (Ottoman-era wooden mansions), walkable woods and relative quiet (automobiles are prohibited, so there’s none of the modern world’s ubiquitous, underlying machine hum), this five-square-kilometer island, about an hour’s ferry ride southeast of the city center, serves as a welcome counterpoint to the bustle and bother of existence in an urban agglomeration of 14 million. There’s just one problem: The dining scene is insipid. There’s no shortage of fish restaurants along the esplanade, just east of the ferry terminal, but in our experience they’re undistinguished – indeed, indistinguishable – and maddeningly overpriced: in short, tourist traps. Some of the boutique hotels offer reasonable, if unexciting, fare on-site, but if you want to dine out, that row of uninspired seaside eateries is the only game in town.

Or so we thought, until we discovered Prinkipo, as this hidden gem of a meyhane is formally known – after the old Greek name of the island – though no one actually calls it that. Customers, aficionados and friends (visit often enough, and you’re bound to progress from former to latter) refer to it simply as Fıstık Ahmet’in Yeri (“Pistachio Ahmet’s Place”).