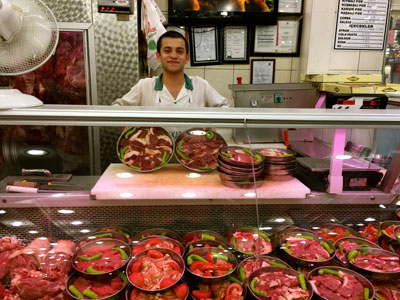 The T1 tramway route passes by virtually all of Istanbul’s most well-known sights. Crossing the Galata Bridge and weaving through the Old City, the T1 practically rubs up against the Hagia Sophia, Topkapı Palace, the Grand Bazaar and other famous attractions, ensuring that most foreign visitors to the city will ride this tram within a five-stop radius. But after the T1 rumbles past the old city walls, it snakes its way northeast through a dense patch of working-class districts usually ignored by tourists. Dreary on the outside though they may look, many of these neighborhoods are laced with off-the-beaten-path charm and culinary delights hidden in plain view.

Located a 10-minute walk uphill from the T1’s Soğanlı station in the district of Güngören (no less than 21 stops away from Sultanahmet) is Istanbul’s Little Gaziantep, a small concentration of restaurants showcasing the cuisine of Turkey’s most prized culinary destination, including dozens of different kebabs and decadent pistachio baklava. The population of Güngören has nearly tripled since the 1980s, and it is now home to a large number of people originating from Gaziantep. Many of them brought their local cuisine to the district’s most central neighborhood, which soon blossomed into entire streets lined with shops and restaurants bearing the provincial specialties.