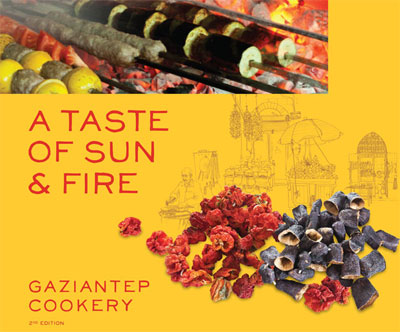 For many (us here at Culinary Backstreets included), the city of Gaziantep is without a doubt the culinary mecca of Turkey. Located not far from Turkey’s southern border, a meeting point between the Arab Middle East and Turkish Anatolia, Gaziantep over the centuries has developed a culinary culture that is deeply rooted in the rhythm of the agricultural lands surrounding it and that is maintained with great pride and honor by the city’s cooks and food makers. Gaziantep is also the source for many of Turkish cuisine’s iconic dishes – the city’s famous baklava is without compare and its kebabs are truly works of art, the standard by which all others are measured.

Visiting Gaziantep is not a problem (CB, in fact, is offering a three-day guided culinary tour [2] there September 14-16), but the challenge has always been how to recreate the city’s sublime food back at home, especially since there are few if any foreign-language cookbooks devoted to Gaziantep cooking. That has now changed with the publication of A Taste of Sun & Fire: Gaziantep Cookery [3], a comprehensive cookbook edited by Turkish food writer Aylin Öney Tan. Originally a project initiated by the city’s Chamber of Commerce, the book – which has wonderful photos by Tuba Şatana [4] and evocative illustrations by Suzan Aral – was compiled using recipes not from professional chefs but from a group of five Gaziantep home cooks who had earned local renown for their cooking and had actually published Turkish-language cookbooks of their own.

Read the interview at Culinary Backstreets [5].