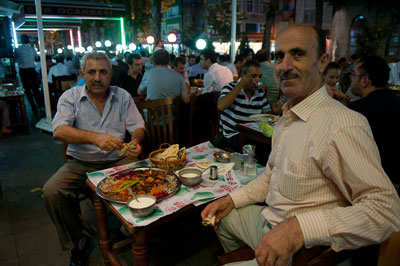 Think of Ramadan, which began in late June in many parts of the world, as a kind of monthlong biathlon that consists of an all-day race to beat back the hunger and thirst of fasting, followed by an all-night marathon of eating and drinking in order to fortify the body for the next day’s fast. In recent years in Turkey, iftar, the traditional break fast meal that used to mostly consist of some dates and a freshly baked round of Ramadan pide, has started to become an increasingly trendy affair, with ministers, businessmen and regular people trying to make an impression by hosting ever more lavish meals.

Find our list of favorite places for iftar at Culinary Backstreets [2].