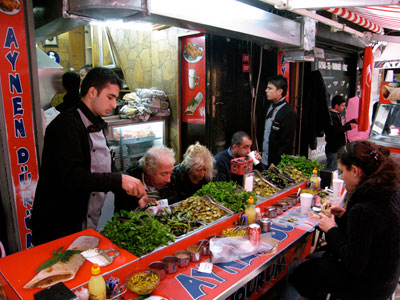 As we’ve written here before, if you do a little rooting around, the Grand Bazaar can be as much about the food [2] as it is about the shopping. Case in point: Aynen Dürüm, a microscopic kebab shack at the edge of the sprawling bazaar that serves exceptionally good wraps (or, as they’re called in Turkish, dürüm).

We first noticed Aynen several years ago on our way into the bazaar, struck by the feeding frenzy we saw at the tiny restaurant, located near the Grand Bazaar’s “currency exchange,” which turns out to be a small alley filled with men shouting out “buy” and “sell” orders.

Dining in Turkey tends to be a genteel affair, even at the humblest kebab restaurants, but there was something different going on at this place. First, there’s the competitive eating contest-like setup – a double-sided outdoor counter with about ten stools around it and a trough in the middle that holds containers overflowing with grilled peppers, sliced pickles and sprigs of parsley. Then there’s the eaters themselves – usually a crowd of hungry Bazaar locals chowing down with a kind of reckless abandon rarely seen in other places around town.