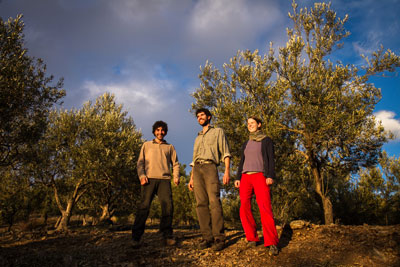 Turkey has a rich dairying tradition, beginning thousands of years ago [2] with nomadic tribes herding goats through the Anatolian steppes. Although Turkey is full of good cheeses that breakfast staples, these cheeses do not have the range of flavors and textures that, say, the French have with their cheese cornucopia. Three young sheep farmers and cheese makers near the Aegean coastal town of Edremit are changing that.

Ferit Uzunoğlu (29), Gudrun Wagner (31) and Şakir Kapankaya (36) have been producing Camembert-style and fresh, herb-crusted sheep’s milk cheese since 2010 in the small village of Hacıaslanlar. Uzunoğlu and Kapankaya grew up together here – Uzunoğlu helped Kapankaya work his family’s land and vice versa. Kapankaya’s father suggested that the two buy sheep and go into business because Kapankaya’s land was perfect for pasturing the sheep, and Uzunoğlu had flat land to grow feed. Uzunoğlu left for Vienna first, to study agriculture, where he met Wagner. Wagner is a focused, lighthearted and strong Austrian farm woman. She is a calming counterpart to Uzunoğlu’s excitable, passionate nature. The two hit it off and Wagner agreed to start a cheese-making business on Uzunoğlu’s father’s land in Hacıaslanlar.