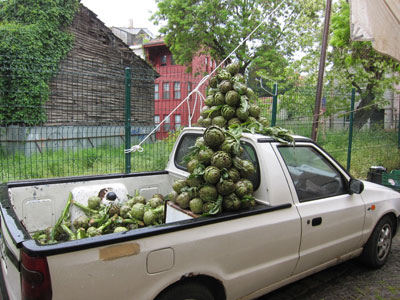 Editor’s note: In the latest installment of our recurring feature, First Stop, we asked Charles King where he stops first for food when he heads to Istanbul. King is a professor of international affairs and government at Georgetown University and the author of Midnight at the Pera Palace: The Birth of Modern Istanbul [2] and other books.

Istanbul is famously a city for strolling, but the steep hillsides of the Bosphorus and the twisting streets of the old city south of the Golden Horn can leave you either breathless or plain lost. Kuzguncuk, on the Asian side of the city, has the advantage of allowing you to explore a magnificent neighborhood via a short walk along a plane tree-shaded main street, with only minimal roaring cars and plenty of lazy street dogs to accompany you.

The ferry from the European side lets you off at Üsküdar, where a fleet of vans and buses make the three-minute journey by coast road to Kuzguncuk. (The neighborhood has its own ferry terminal, but it was out of commission the last time I was there.) Kuzguncuk is one of the few places in the city where you can get some sense of what a mahalle might have felt like in the days before rapid development, high-rises and expanding shopping malls. Most of the buildings are only a few stories tall, and the main street of the old village is lined with stately plane trees.