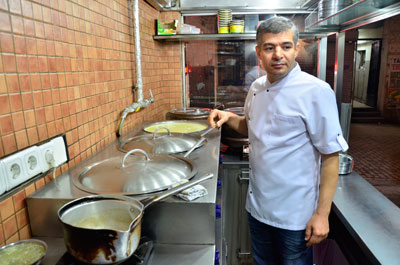 Most of Murat Kelle Paça’s clientele stumble in between 1 and 5 o’clock in the morning, after a boisterous night of drinking, concert-going and dancing. Located in the heart of Beyoğlu and surrounded by the best nightlife in Istanbul, if not all of Turkey, Murat attracts one of the most diverse crowds of any restaurant we have seen in Istanbul. During the day, the usual blue- and white-collar crowd – from lawyers to bankers to store attendants – trundles in during their lunch break. But flash-forward to nighttime and the scene becomes much more interesting.

Reminiscent of the cantina scene in Star Wars, the disparate creatures include rock musicians, pimply foreign-exchange students, Instagramming hipsters and everything and anything in between.

Murat serves soups, kebab platters and dürüms (wraps), which are all a cut above the rest. But the real stars of the Murat show are the hearty broths. As you walk into the cramped entrance, which is shared with the kitchen area, you will pass by the soup master ladling the steamy goodness into small metal bowls from the dozen or so pots surrounding him.