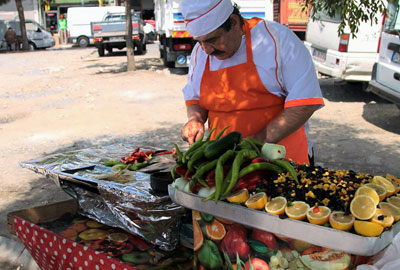 The first time we approached the stand of the legendary fish sandwich man, we were pleasantly surprised by what we saw: a dark, portly man with a glorious mustache (hence his nickname, Mario) turning fish on a portable grill cart next to the Karaköy waterfront. He had a long line of people patiently waiting for an hour to get their order in. He is surrounded by other balık ekmekçi trying desperately to ride the wave of his success, but they struggle to survive.

Mario, whose real name is Emin, takes his time like no other food seller on the Golden Horn. (His assistant, who works on Emin’s days off, is a stretched-out, taller version of Emin sporting a mustache of similar dimensions and is of course referred to – by us and some of our friends – as Luigi.) Whether Emin Usta has 20 people waiting or two, with one hand he nonchalantly takes a puff on his cigarette, and with the other he slowly turns the onions roasted in Urfa pepper flakes and a dozen other spices. He regards the people in line with an air of indifference that is uncommon among the famously hospitable Turks. But he has been doing this for 15-odd years now and knows he makes the best damn fish sandwich the city has to offer.