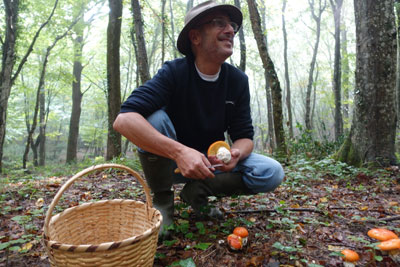 “This would be front-page news in France!” Jilber raved, darting off between tall chestnut trees and oaks, obscured by a hazy steam that seemed to hang in the forest like a gauzy Halloween decoration. He looked over each shoulder and all around him where it seemed he was surrounded by golf balls, shanked off and forgotten in the rough. Called ovoli to admirers in Italy, Amanita caesarea to the bookish, and yumurta, or egg, in Turkish, these were Caesar’s mushrooms, named for their popularity with the Roman emperors. Gathered together in the damp, brown leaves were a couple of long-stemmed, large-capped mushrooms as big as dinner plates, their tops beginning to flatten. Beside were smaller bulbous ones of the same family that evoked clown noses, while among the brush were caps just beginning to emerge from their white “shell.” Our expedition of four, led by Jilber Barutçiyan, Turkey’s leading wild mushroom expert, froze and took in the marvel of this forager’s treasure trove.

Read the rest of this story at Culinary Backstreets [2].