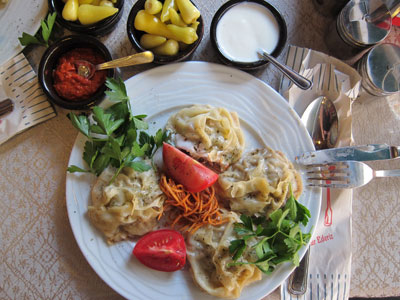 Editor’s note: We’ve written previously about the strong connection between exiles and their dumplings [2]; in this review, guest contributor İdil Meşe writes of her own family’s ties to this comfort food.

My grandfather passed away before I was born, and although we never met, he has always been a fascinating figure for me. He was from Samarkand, Uzbekistan, but after losing his entire family during the Bolshevik Revolution in 1917, he immigrated to Turkey, bringing his shamanic beliefs and cuisine along with him.

I recall one evening when my mother and uncle shared memories of their father in my uncle’s kitchen over an intriguing, deep steamer, in which huge dumplings stuffed neatly with hand-chopped lamb and beef with a bit of tail fat – my grandfather’s recipe – were delicately arranged and left to cook for many hours. And I remember that sublime first taste of these dumplings – the festive, mouthwatering flavors that invoked happy pastoral scenes in my mind. It felt as if I was finally meeting my grandfather for the first time, and his Uzbek mantı became my favorite food on earth.

Read the rest of the story and find out where you can eat Uzbek mantı in Istanbul at Culinary Backstreets [3].