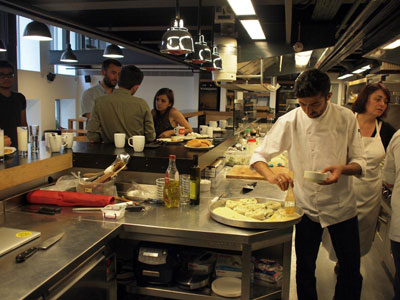 Who says there’s no such thing as a free lunch? In fact, over at Gastronomika, a new Istanbul culinary project, the food is served not only free of charge but also with an intriguing – and ambitious – backstory.

As Gastronomika’s founders describe it, the project is “an open-source, long-term, community project” whose goal is nothing less than domestic and international “rebranding” of traditional Anatolian cuisine. We recently met up with Engin Önder and Semi Hakim, the project’s creators, in Gastronomika’s community kitchen at SALT Beyoğlu to find out more. SALT is an eclectic cultural institution that – along with Gastronomika’s community kitchen – hosts art exhibits, a rooftop garden affiliated with the local Slow Food chapter and the Robinson Crusoe bookstore, an Istanbul institution that had recently been evicted from its nearby longtime home on the bustling pedestrian thoroughfare İstiklal Caddesi.

Read the rest of this feature at Culinary Backstreets [2].