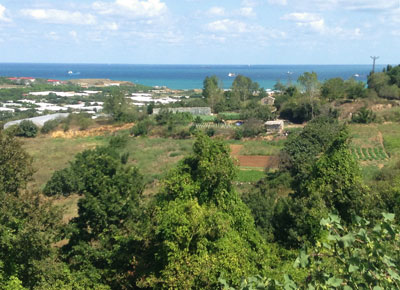 “We grow everything here – kale, dill, peppers, cucumbers, tomatoes, arugula, eggplant, lettuce, cauliflower… everything,” the elderly woman says proudly, waving her hand in the direction of her small field as she digs her worn plastic sandals into the dirt. While she grows the vegetables and herbs, her 80-year-old husband tends his pomegranate trees and takes their products from this patch of farmland at the far northern end of Istanbul’s Sarıyer district to sell at local markets around the city.

“We’re working from morning prayer to night prayer,” the woman adds, as her neighbor, leaning over a makeshift fence to listen in on the conversation, pipes up: “Atatürk brought us here; why should we have to leave again?”

These farmers in Gümüşdere village, none of whom wanted to share their names or have their photographs taken, are descendants of some 40 Pomak families – Muslims who speak a dialect related to Bulgarian – originally from Thessaloniki, Greece, and brought to Turkey in 1923 as part of the population exchange agreed upon between the Greek authorities and the new Turkish Republic created by Mustafa Kemal Atatürk. The land onto which they were resettled was a sandy, unpromising patch of Black Sea coast, transformed through years of effort into around 50 hectares of productive agricultural fields and greenhouses still growing food for Istanbul today.