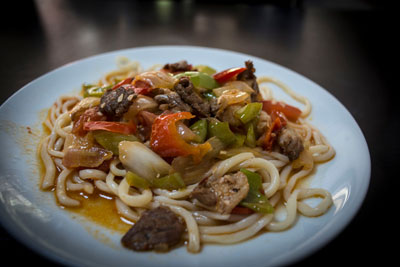 Anyone who has spent time in the former Soviet republics of Central Asia (or, “the ’Stans”) will have developed a deep and lasting appreciation for the cuisine of the Uighur, a Turkic people spread across the region whose homeland, Uygurstan, lies across the border in western China. In Dushanbe, faced with the prospect of another oily pile of plov, Central Asian people and visiting foreigners alike gleefully opt for Uighur (romanizations vary) cuisine, whose hand-pulled, bouncy noodles, lagman, are ever-present from Shimkent to Khujand, yet still exotic.

We’ve chronicled [2] the Uighur scene in Istanbul’s Zeytinburnu, where excellent lagman is to be found, but sometimes this neighborhood, in the city’s south, feels as distant as the Kashgar oasis itself.

Suffering from a serious lagman deficiency last summer, we took a casual meander around the backstreets near the Caucasus-bound bus station of Aksaray that turned into a moment of important discovery. The writing was right there on a leather-bound menu perched in the window: Lezzetli Uygur Yemekleri. We’d found Turkistan Uygur Lokantası and its simple yet enticing promise of “Delicious Uighur Food.”