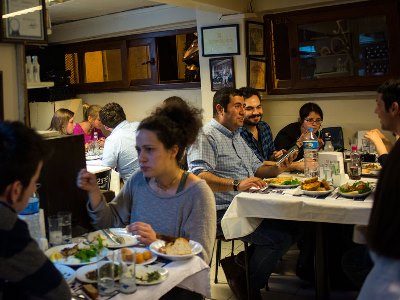 The departure of Aret, our favorite garson in the city, had us reconsidering our love of this little cubbyhole meyhane where we’ve spent so many nights over the years.

With our loyalty to Aret and his to us, would it not be cheating to return to Çukur when Aret now runs his own place just a few blocks away? More importantly, could we expect the same standards from Çukur without Aret around? In the meyhane world, waiters, like janissaries, wield unusual power over the operation and their departure can signal bad times ahead.

After much deliberation we recently descended into the subterranean world of Çukur Meyhane and found it as good as ever. We’ll pass on the hamsi until they are back in season, but the balık kokoreç and puffy fried nuggets of whitefish were good enough to convince us that there’s room enough for Çukur and Aret’s new place in our dining life.

Read the rest of this previously featured review at Culinary Backstreets [2].