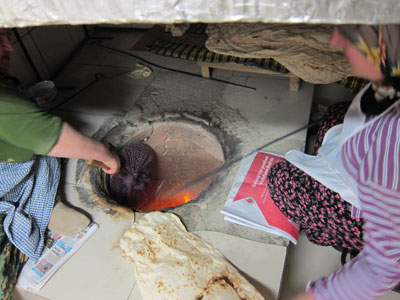 In the Kurtuluş district of Istanbul, we’ve lately been exploring links to older, nearly lost, Istanbul culinary traditions. Spending time in the sweetshops, milk bars and şarküteri of this district, we’ve seen a glimmer, if faded, of the “Old Istanbul” that people remember from the 1950s and ’60s, when the city’s historic minorities – Greeks, Armenians and Jews – played a prominent role in the culinary scene of the city.

A time before this city became, as one local Greek Kurtuluş resident not so tactfully put it, “one great big Kebabistan.” It’s a complex and endlessly fascinating subject, one that never fails to spark our curiosity.

And then we were distracted by the smell of fresh bread.

Fresh lavaş, to be more specific, being hoisted out of a fiery hole in the floor on a blackened hook by the sturdy Gül Hanım, dressed not in baker’s whites but in a wild floral collage of patterns that was covering her headscarf, billowy pants and shirt. Working right across the pit from her was the similarly clad (and sturdy) Şükriye Hanım, who gave the dough a final spin and stretch before patting it onto the wall of the brick with a paddle that had a wide round cushion on its end. Then there was Ayfer, who, much to Şükriye’s chagrin, sat in a chair before a machine that rolled out paper-thin ovals of dough. “What, you don’t have hands?” Şükriye said teasingly. The fan of the hood above these women roared, the paddle thumped and the hook scraped against the wall of the oven as the three bakers all cackled and jabbed in loud voices.