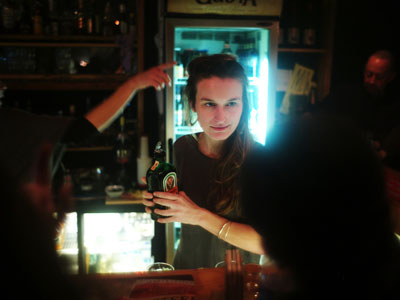 We like to think of the building at the corner of Sakız Ağacı Caddesi and Küçük Bayram Sokak as the mullet of the Beyoğlu neighborhood’s entertainment venues – out front is a tidy, little Armenian Catholic church, but in the back, it’s a wild and tangled mess of a party.

Of the several bars and clubs that occupy the five floors of the building, Barba is the one we usually set out for, but the presence of its colorful neighbors can add much to the excursion. Upon entering the building, we’ve often been drawn into the first-floor venue, Pikap, which has live music most nights. On one recent visit, the house band segued from Turkish rock covers right into a reeling Black Sea number led by a synthesizer. A member of the audience sitting in barked quick, sharp and unintelligible words into the microphone. A man, stripped to the waist, got on stage and belly danced among the musicians as several other patrons joined hands in a line dance led by a woman waving a napkin in the air. It was smoky and dark but for lasers and stage lights. The waitresses were doing a brisk business in flights of colorful shots.