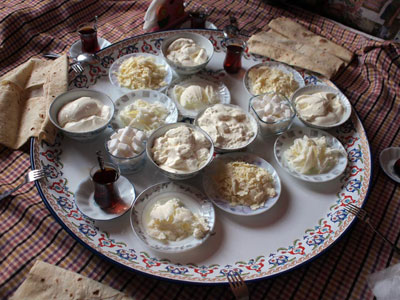 Like many other Central Anatolian cities, Erzincan is one of those places with very little there there. The natural setting – on a high plateau and ringed by craggy peaks – is promising, but the town itself feels like it’s been scrubbed clean of all traces of history or local distinctiveness, its streets lined with characterless buildings painted in fading pastels, their ground floors occupied by the same furniture and supermarket chains found in every other city in the Turkish heartland.

Erzincan does have one thing going for it though: it’s the kind of place where you can land at the airport, hop into a waiting taxi and ask your driver to take you to the local cheese sellers’ bazaar, and he’ll take you straight there, no questions asked, as if it’s the most natural request he could get.

As it should be. Erzincan is famous throughout Turkey for its tulum, a sharp and crumbly raw sheep’s milk cheese traditionally aged inside a goatskin, and the compact market is perhaps the closest thing the city has to a historical attraction. The current peynirciler çarşısı, about a dozen small shops housed in a U-shaped strip mall, may not be that old, but the vendors there are part of a homegrown tradition that goes back centuries.