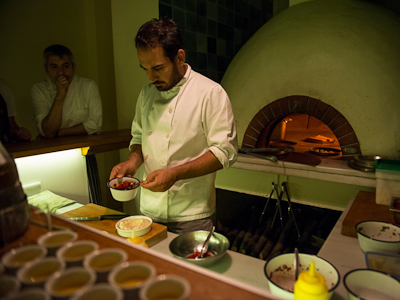 It is puzzling that Istanbul, a city of some 15 million people with an increasingly lavish lifestyle, a world-famous cuisine and a booming tourism industry, has so little sparkle when it comes to fine dining. We’re surprised that the Prime Minister himself has not jumped into the culinary scrum by demanding no fewer than three Michelin stars from every restaurant. Still the city has yet to answer with one.

In a recent New York Times column [2], veteran journalist and Istanbul denizen Andrew Finkel wrote, “The problem, I think, is that even those Turkish cooks who set out to do something different are still catering to what they think other people want to eat rather than staking their reputations on food they believe in.”

Luckily, the food chefs think people want to eat is moving away from pirated European cuisines and giving way to a movement based on local ingredients and traditional Turkish cooking techniques. The New Turkish Kitchen, as some are calling it, even in all of its locavore glory, might feel like an Istanbul Spring, but, in our opinion, the cooking lacks the innovation, risk and reward to call it “new.”

The rest of this new review can be found on CulinaryBackstreets.com, here [3].