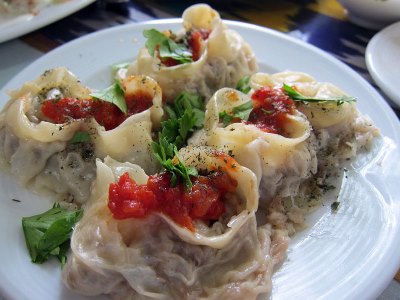 [1]
In the former Soviet Central Asian republics, the boilerplate restaurant menu consists of plov, lagman, shashlik and samsa. Tired-looking Uzbek, Kyrgyz, Kazakh and Tajik establishments all serve up the same limp noodles and oily rice with a shrug – it’s their job. In the markets of Samarkand, Osh and Almaty, we found some exciting exceptions to this rule but, generally, restaurants in the region tend to successfully obscure the fact that Central Asian food, when cooked with passion, can be a riot of the senses.

In Central Asia, according to regional specialist Sean Roberts, culinary traditions have customarily been preserved by a master/apprentice system that mainly existed outside restaurants. Monumental occasions like weddings and funerals in Uzbekistan often involve several hundred guests eating multiple meals. For this, an usta is called in from his day job, like Clark Kent from the newsroom. The usta might have been plowing a field in the morning, but he quickly dons his usta hat and sets to the task of feeding an entire village an extremely important meal.