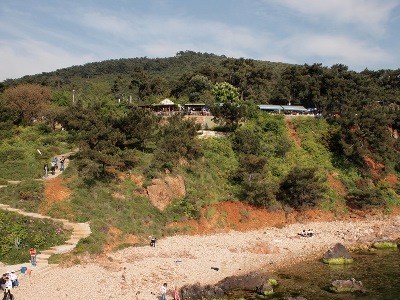 [1]
One of the great joys of spring and summertime in Istanbul is the chance to get away for a day to one of the Princes’ Islands, the car-free and forested archipelago that is a short ferry ride away from the city. The only downside to an island hop is actually getting there.

As soon as spring makes its first appearance in Istanbul, the hordes descend on the mainland’s ferry terminal, filling the boats to beyond capacity (at least on the weekends). With your neighbor’s picnic basket sticking into your ribs, the boat ride to the islands is usually less of a pleasure cruise and something more resembling those scenes in natural disaster or science fiction films where a frantic population is forced to huddle together after barely escaping their city’s demise.

Fortunately, most of the people on the ferry are heading for Heybeliada and Büyükada, the last two stops on its route, allowing you to step off earlier on Burgazada, the smallest and least visited of the Princes’ Islands. The island has few easily accessible beaches and picnic spots, but what it does have is a laid-back atmosphere and several charming waterfront restaurants and cafés in the harbor. Better yet, Burgaz is home to Kalpazankaya Restaurant, an out-of-the-way, open-air meyhane on the island’s backside that will quickly help you forget about the crowded mass of humanity left behind on the ferry.