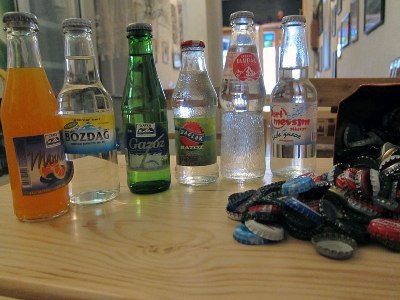 [1]
In a 2003 TV commercial for Cola Turka, the actor Chevy Chase was seen speaking Turkish and then sporting a moustache, after taking just one sip of the intended challenger of Coke in this country. This sensational ad – which riffed on the old theme of American cultural imperialism through its number-one agent, Coca-Cola – was the first time that Turkish soft drinks caught our attention. Though we didn’t take to the overly sweet Cola Turka, we did start looking beyond, to its local brethren in the market: gazoz, a world of nearly extinct Turkish carbonated drink brands with a fanatical following.

One recent winter morning at Avam Kahvesi, the waiter, Ulaş, pitched wood into a large fireplace in the back. The dance of flames refracted through gazoz bottles that lined the walls, sat on tables, and peaked from crates stacked around the room. There were literally gazoz bottles everywhere in this one-of-a-kind shrine to Turkish soft drinks.