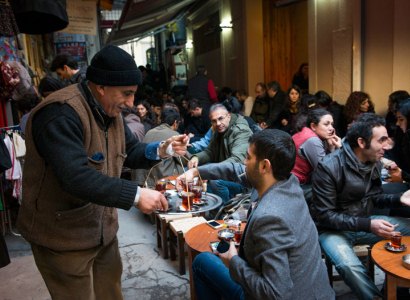 [1]
The Turkish proverb “At, avrat, silah ödünç verilmez” (“neither horse, wife nor weapon should be lent”) is sometimes repeated as a way to recall the nomadic warrior past of the Turks. The primal Turkish essentials are clearly stated, but what about the çay bardağı, the tea glass that has become such a ubiquitous Turkish icon? Reading the 17th-century works of Evliya Çelebi, the Ottoman Rick Steves, you’d expect to find descriptions of medieval tea jockeys swinging trays filled with those tulip-shaped glasses through the alleyways of the Old City. Right?

Wrong. As firmly rooted as Turkey’s tea culture may now be, it was only planted in the 20th century and didn’t really take hold until after the First World War, when coffee became too expensive for most. It was not until 1937 that tea harvesting on the Black Sea coast began in earnest. But as we’ve witnessed, things can move fast in Anatolia and today Turkey is one of the world’s biggest producers and consumers of tea.