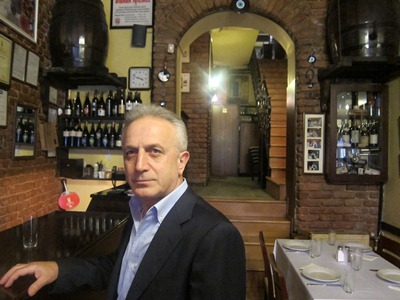 We can’t prove it, but we suspect a network of tunnels lies underground in Beyoğlu that connects most of the meyhanes of Asmalımescit and Nevizade Sokak to the same mediocre kitchen, resulting in unexceptional mezes at scores of venues in this dining district. Following a number of tips, our search for a standout meyhane led us to the unassuming Asmalı Cavit on Asmalımescit Caddesi, where we’ve consistently had outstanding food. This traditional meyhane bucks the trend toward mediocrity with subtle but significant tweaks that, for us, make the meal.

Asmalı Cavit does not overwhelm you with a monstrous meze tray. Most diners here seem to know what they want and discuss the alternatives with the waiter, sometimes creating elaborate scenarios according to personal preference. Owner Cavit Bey, ever-present in the dining room, looks after every table’s wishes. We have yet to hear him answer a request with the expression “maalesef” (“unfortunately not”).