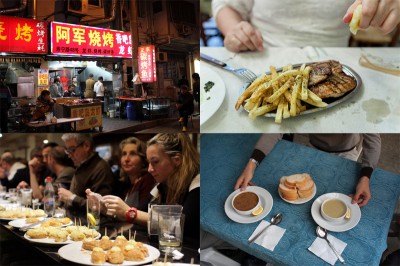 [1]
As some of our readers might already know, we recently launched a new venture: CulinaryBackstreets.com [2]. The idea behind this new site is simple. When it comes to exploring a city’s authentic dining scene, while the stomach should ideally serve as the best compass, the truth of the matter is that it’s hard to find your way without good local advice. That’s where Culinary Backstreets comes in. CB brings together some of the most knowledgeable and passionate food writers and bloggers across the globe to create a hotline for the hungry traveler, bedside reading for the foodie voyeur, and a heavily bookmarked index for those who want to explore the culinary backstreets featured in our pages. With dispatches from Istanbul, Athens, Shanghai, Barcelona and Mexico City (coming soon), CulinaryBackstreets.com is a community of readers and writers who follow their stomachs to the next destination.

The idea for the project came from friends and readers telling us they “wish there was an Istanbul Eats-like guide to restaurants in every city.” It was a dream of ours then to parachute into Barcelona or other cities, locate the greatest local spots and produce thrilling reviews for our website. Easier dreamt than done.

The truth is, our beat is Istanbul, a city we know and eat in daily. The reviews we publish on Istanbul are built on more than a decade of combing this city’s eateries. So when we decided to make this new project a reality we selected cities where the culinary culture had made a deep impression on us, places that made us hungry. In each of those cities, we partnered with talented local writers who have that same passion and experience in the culinary backstreets of their city. We also plan for Culinary Backstreets to become the first stop for people looking for culinary tours in some of the world’s gastro-capitals. Right now, we are offering walks in Istanbul and Shanghai, with more to come.

Every week, Hollis Duncan [3] in Barcelona, Despina Trivolis [4] in Athens, the Shanghai crew of Kyle Long and Jamie Barys [5], Ben Herrera [6] in Mexico City and, of course, Istanbul Eats will post fresh dispatches from the culinary backstreets in which we live. We hope you’ll enjoy this new site as much as we do. And, in the meantime, stay tuned for more and varied culinary activities in each of these cities.