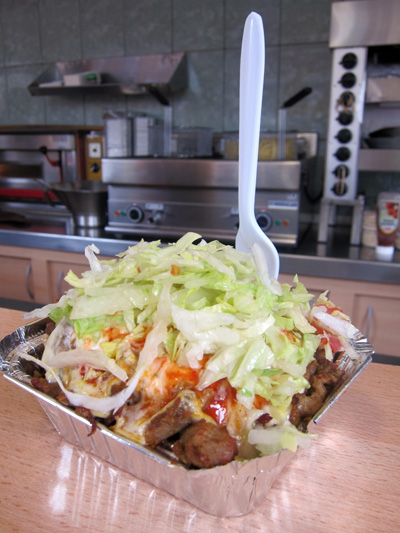 [1]
In Rotterdam, one of Europe’s most culturally mixed cities, you’d expect a more diverse street food scene. The Rotterdam diet does embrace shwarma, Vietnamese spring rolls and Turkish lahmacun, but then Dutchifies the food by dousing it with liberal squirts of mayo. Due to cultural assimilation or by catering to local tastes, we found little to eat during a recent visit to this Dutch city that had a strong expression of identity, foreign or local.

Probing the local snack culture and its origins with a group of Rotterdam chefs proved vexing. It seemed the group had little they felt comfortable calling their own until one said, “There’s something called the ‘Hairdresser,’” shaking her head with disappointment. “It’s really awful but it is from Rotterdam,” she added.

We were intrigued. After learning the Dutch word “kapsalon,” which refers to a barbershop or a hair salon, we started spotting the word printed in döner shop windows and on snack stand menus all over town. We asked taxi drivers, our hotel concierge and members of the cultural elite about this local phenomenon and, love it or hate it, everyone knew the “hairdresser.”

According to Linda Roodenburg, a Dutch anthropologist with a strong interest in food who has researched the subject of kapasalon, this Rotterdam specialty was born when a Cape Verdian kapper (i.e. a hairdresser) walked into a Turkish döner shop and placed an order that included just about everything on the menu. In an aluminum takeout tray, he wanted the thick cut fries of Flanders laid across the bottom, slices of Turkish döner laid on top of the potatoes, and then garlicky mayo and sambal (a Malaysian-style condiment popular in Holland) squirted on top of those ingredients before placing a slice of Dutch Gouda cheese on top like a blanket. But there was more. The whole thing was then put under a heat lamp to allow the cheese to melt. Once sufficiently bubbly, tomato and lettuce were added and a plastic fork was planted upright in the middle like a flag of all nations. Those were the specifications dictated by the hairdresser and carried out by the dönerci. Together, they created a monster. One Rotterdam daily declared it both a “Caloriebom!” and the “De absolute snackhit van Rotterdam.” There is even talk of a festival being organized in honor of kapsalon (the dish, not the profession).

El Aviva, the place where the kapsalon was created in 2006, is located just beyond the western limits of our tourist map of Rotterdam but we easily found this local institution by asking around on the street. On the wide commercial strip there was a branch of a çiğ köfte chain and a jewelry store with the Turkish word “indirimli” (or discount) in the window. Based on the nation-wide craze for the kapsalon we’d encountered, we were surprised not to find a huge inflatable likeness of the dish up on the roof or even any “home of the kapsalon” signs outside El Aviva. The kapsalon may have been born here, but it found fame in tonier districts.

Inside the shop, Turkish variety shows played on the flatscreen and a calendar distributed by a mosque in Turkey hung on the wall behind the phone. Behind the counter stood Derviş Bengül, a native of Aksaray, near Konya, who has lived in Rotterdam for 20 years and worked at El Aviva for the past 15. He considers Rotterdam his home but his world is largely Turkish. He has raised four children here yet does not own that most Dutch of accessories, a bicycle. Derviş was present when the first kapsalon was constructed but says they had no idea it would be so successful. “We should have gotten a patent on it, but we were late. Before we knew it customers were coming in saying they’d seen the kapsalon down in the city center. I heard they even sell it from trucks in America. These days, there is nobody who does not eat the kapsalon.”

Ankara-born Yasin Bey, a regular of El Aviva said, “the döner sandwich is a thing of the past; now there is kapsalon.” Fiddling with a set of chunky black prayer beads while he waited for his order, he estimated that for the past five years he has eaten kapsalon here at least four times a week. His friend Hacı Ağa thumbed a set of yellow amber beads but didn’t speak much. He said he’d be eating his kapsalon before heading to the mosque, as he often did on Fridays.

Finally, our kapsalon arrived and we got to work. The fries were fresh and the meat, not döner but fried small-cut chunks of lamb, was pleasantly seasoned with cumin. Piercing the layer of cheese, a euphoric steam whooshed out, fogging the lenses of our glasses and reminding us of a smell we knew from grade school cafeterias, inner-city gyros joints encased in bullet-proof glass and sticky-floored food court KFCs. It was the international smell of cheap, fast food.

It was unclear how to proceed through the architecture of the kapsalon. Watching the sauce soaking the fries and the cheese starting to dribble down, we realized that the Cape Verdian hairdresser’s intention was to celebrate all ingredients, everything found in the Rotterdam snack arsenal, in every single bite. So we mashed and dunked, as he must have, working in the cheese and sauce and crisp cool lettuce with our plastic fork until it all looked fairly uniform in the aluminum trey. Then we ate it very quickly.

A Dutch man, clearly a regular here, soon came in for a snack of lahmacun. Standing beside us at the counter, he hosed his first lahmacun down with ketchup and mayo, folded it in half and gobbled it down. Speaking Dutch, Derviş explained that we’d come all the way from Turkey to eat the true kapsalon. The Dutch man folded his second lahmacun and took a whopping bite. He seemed unimpressed by our visit. If we’d come all this way, why hadn’t ordered a large kapsalon, then? he asked Derviş.

Walking off our lunch, we thought about Linda Roodenburg’s work collecting recipes from all of the foreign communities in Rotterdam, many of which were somehow represented in the kapsalon – there was the local fries and cheese, the Turkish döner, the Malaysian sauce. Linda believed the concept, though certainly not the ingredients, of the kapsalon came from a single pot stew the hairdresser grew up eating in Cape Verde. When we returned to the hotel we called Derviş on the phone to see what he thought about the identity of this dish. We asked him if he considered kapsalon Turkish or Dutch, but he chafed at assigning any nationality. “Kapsalon is a Rotterdam thing. Our thing,” he said.