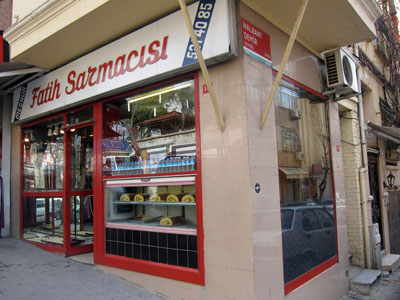 [1]
Settling into our first cross-country journey in Turkey many years ago, we were pleasantly surprised by the comforts of Turkish bus travel. The young garson wore a proper uniform and dribbled cologne in our hands every hour or so. Tea was served regularly, accompanied by one of our early Turkish culinary discoveries, Eti brand pop kek – those unctuous and delicious cakes frosted or stuffed with everything from raisins to chocolate – the Anatolian Twinkie. Call us heathens, but we love them.

We’ve tried many traditional Turkish cakes, but none we encountered measured up to the beloved pop kek. That is, until one recent visit to Fatih Sarmacısı, an Ottoman-era shop making our new favorite cake, sarma (the word means “wrapped” or “rolled up” in Turkish). Sarma is a particularly light sponge cake that is loaded with apricot marmalade, soaked in a thin syrup and rolled up, hence the name. It is served chilled with a sprinkle of coconut and pistachio shavings. The syrupy cake chilled the mouth, with each bite grabbing our attention to the small bit of apricot jam hiding in the folds. The sponginess certainly reminded us of a good pop kek, but this sarma was a much cleaner, headier experience.

As we sat with our sarma at one of the two tables, an errand boy wandered in and ordered a full sarma roll, a few kilos according to the scale. “What is this sarma, ya? You don’t have a branch in Cyprus?” he asked, explaining that his boss was sending this to a client in Cyprus.

Adnan Bey, who watches the till, is the third generation of his family making and selling sarma from the same shop in Fatih. They don’t have a branch in Cyprus, or anywhere else. He carefully wrapped the sarma and tied a ribbon around it. According to Adnan, his grandfather, İbrahim Bey, left the Ottoman palace kitchen and opened this shop making sarma. His son Necmettin carried on the tradition and now his sons, Adnan and Arkan, run the business.

“We’re the oldest around here. Well, not as old as the medrese,” he said, pointing to the big stone building across the street, part of the centuries-old Fatih Mosque complex.

We were so busy dredging our plate for sarma crumbs, we felt completely free of the culinary legacy of the Ottomans, whose fondness for elaborate dishes usually hangs around the dinner table like a dark cloud, obscuring the simple pleasures of a meal. The goodness of this cake isn’t too hard to access. Maybe that’s how İbrahim really ended up on the outs with the Sultan – he was ejected from the palace kitchen for making a cake that was too easily likable, not quite odd enough for the Sultan’s taste. It certainly worked for us and a steady stream of the post-prayers crowd from the nearby Fatih Mosque. We resolved that next time we buy a bus ticket, we’ll take a cue from the Cypriot businessman and stop in here for a slice for the road. Leave the pop kek for the uninformed.