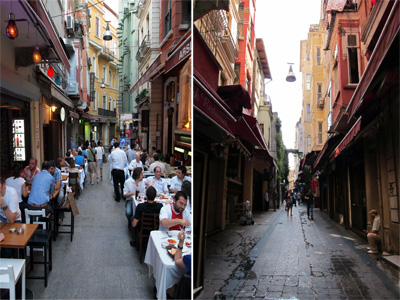 [1]
Late afternoon on Sofyalı Sokak, the restaurant-crowded street in Beyoğlu’s Asmalımescit district, is usually happy hour – two-for-one tequila shots, rakı glasses clinking, half-liters of Efes hoisted. But today, in the aftermath of a Beyoğlu-wide crackdown [2] on outside seating that left the street bare of a single place to sit outside, the scene was palpably unhappy. (The “before and after” photo above is of Sofyalı Sokak.)

Since the indoor smoking ban went into effect, outdoor seating has become even more prized on this street, a hot destination for revelry. While most businesses held permits for their outdoor seating area, violations of the space were clearly rampant. Over the past year, tables seemed to multiply like mushrooms overnight until finally, pedestrians were forced to pass in a single-file line between the gauntlet of tables filled with diners, drinkers and smokers.

But this afternoon, police and municipal inspectors swept through, confiscating outdoor furniture and ordering the demolition of decks built outside of restaurants. A pile of rubble, previously a deck, stood just downhill from the stylish House Café, while across the street waiters worked frantically with crowbars to remove a particularly permanent-looking structure.

Pushcart vendor Murat said, “This affects all of us. Who am I going to sell poğaca to if no one is outside? How can I live if I can’t make money? They’ve just killed Asmalımescit.”

But a waiter from Perentez Café said, “Think about this: what if there’s a fire and the trucks can’t get through the street. In two hours how many lives will be lost?” Located just off of Sofyalı Sokak, Perentez, for now, remains one of the few bars in the area with outdoor seating.

According to a report in the daily Radikal, the Beyoğlu municipality is responding to citizens’ complaints of the illegal blockage of streets and sidewalks. But today, on Sofyalı Sokak, business owners, loyal customers and others stood in knots discussing the sweep. The murmur going through the crowd was “Tayyip,” as in Recep Tayyip Erdoğan, indicating the Prime Minister as the hand behind the lightning brigades. According to one version of the rumor, the PM was incensed after his motorcade was unable one recent night to get through Beyoğlu’s people-crowded narrow streets because of all the outdoor seating and gave the order for what could be dubbed Operation Table Clearing.

According to Bade, the owner of the ever-popular bar and café Badehane [3], the other night at around 11 p.m. an ominous handwritten note was delivered saying, “Your use of the sidewalk has been cancelled.” Today Bade didn’t put any tables outside and doesn’t know how her business will survive. “We make all of our money in the summer thanks to our outdoor seating that I paid the municipality for in advance. I’m not sure if I’ll be able to pay my rent. But I’m hopeful that we’ll find a solution.”

Around the corner on Asmalımescit Caddesi, which was cleared out over the weekend, a shoeshine man sat in front of his large brass box as a deliveryman with a handtruck urged him to move out of the way. The shoeshine man shook his head and took another bite out of his sandwich, for now the last man in Asmalımescit still sitting outside. 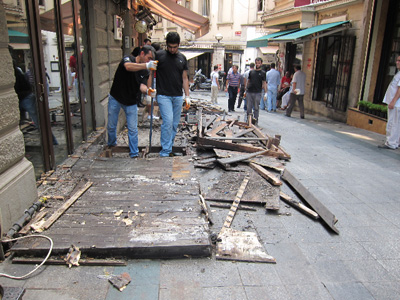