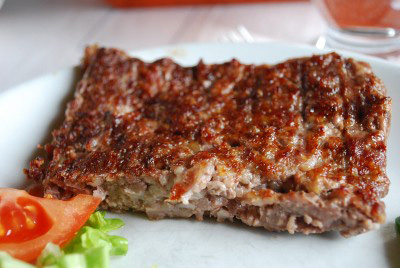 On my last two journeys to the Gallipoli region, I made sure to make a stop along the way for satır et, an awesome dish whose name simply means “chopped meat” and which is sold by several restaurants along the way to Gallipoli. And with those stops, the taste of the delicious meat sold here – chopped, of course – was engraved in my memory forever.

Satır et is directly tied to the Keşan region, located near Edirne. The dish and the area are so intrinsically linked that Keşan’s local government created a website [3] to promote satır et and the area restaurants that serve it. The secret of satır et is evident. A whole suckling lamb is cooked on a spit over oak coals, then chopped into small chunks that are formed into a large patty that’s sent back to the grill to cook a bit more and develop a nice outside crust. Folks, we are talking about a clean and simple grill item here – nothing but meat flavored with salt and smoke. But I can only compare the feeling of eating this dish for the first time to what Christopher Columbus must have felt like when he discovered America – every juicy bite was a revelation. (For a bit more on satır et, take a look at my dear traveler-eater friend Löplöpçü [4] Semih’s Turkish-language blog post [5] about his Keşan adventure while he was on his way to Çanakkale.)

I can recommend eating satır et at Çamlıbel [6], which is just outside the town of Keşan. Another great spot is Keşanlı Enver Usta [7], located in a village called Beylikdüzü, near Keşan. At both of these places, you will leaving feeling light as a bird despite having just eaten grilled meat, allowing you to continue driving happily to your destination with only the smell of this delicious lamb to accompany you and thinking that life is magnificent!