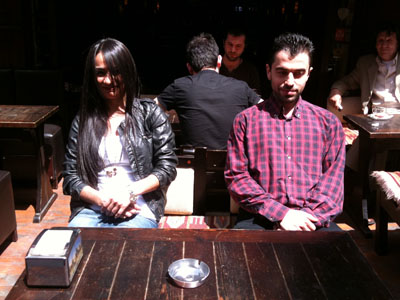 [1]
We were as shocked as everyone else in Istanbul to read recent reports [2] that claimed the Beyoğlu municipality’s inspectors were going around the neighborhood telling bar owners to get rid of their two-person outdoor “loveseats” – and in some cases forcibly taking those seats away – because they were leading towards “immoral” behavior. Could it be true? Could the powers that be in Beyoğlu city hall be so cruel as to try and keep the youngsters of Istanbul from having a chance to cuddle up next to each other while sipping their beer?

Beyoğlu officials, in their defense, have stated that it was simply a matter of forcing bar owners to replace old and worn-out furniture. We decided to check things out for ourselves and headed down to bustling Mis Sokak, home to numerous bars and cafés, to see what the barkeeps had to say. According to Derya of Nero Cafe on Mis Sokak, the municipal officers have been spreading the word for a while that two-person seats are a “visual nuisance.” So Nero had their benches cut into two pieces to dodge the wrath of the dreaded zabıta. The owners of Bodega, across the street from Nero, were less lucky. They had their loveseats confiscated and damaged in the process.

“Banning these seats is the same philosophy as internet censorship,” he said, referring to the recent controversy over the Turkish government’s plan to create a mandatory filtering service for internet users. “These two-person seats have a history of, like, 1,000 years. And people have always wanted to sit next to each other.”

Unlike the whole loveseat story, that, at least, was something nobody could argue with.