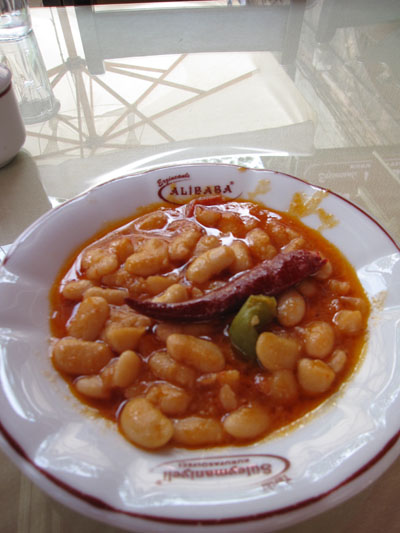 [1]
(Editor’s Note: This week we are celebrating the white bean, that humble legume that reaches levels of incredible complexity and flavor when in the hands of Turkish cooks. Until we visited some of Istanbul’s shrines to the baked bean, we generally regarded the dish as something eaten out of a can beside railroad tracks. But Turkey takes this humble food, known as “kuru fasulye,” seriously; that means chefs in tall toques carefully ladling out golden beans in a rich red gravy onto monogrammed flatware, served by waiters wearing bowties and vests. Even in the least formal of Istanbul’s beaneries, the guy manning the pot has the air of a high priest knowing that his incantations alone conjure something unusually delicious out of a simple bean. This is no hobo fare. This week, to celebrate the bean, we are counting down our five favorite places in Istanbul to get “kuru fasulye.”)

According to historians, Tiryaki Sokak – Addicts Alley – got its name from the opium served up in its coffeehouses in Ottoman times. Though that substance has been long banned, since 1924 Ali Baba has been ladling out something equally addictive from a great copper pot: Erzincan-style baked beans. Ingredients such as onion, tomato and chili pepper are more recognizable in the soupy base, the bean bigger than its Black Sea counterpart. Though we remain junkies of the Black Sea variety, the Erzincan preparation is a nice change of pace and there’s no better place to try a bowl than sitting on Ali Baba’s squat stools in the shadow of the minarets of the sublime Süleymaniye Mosque.