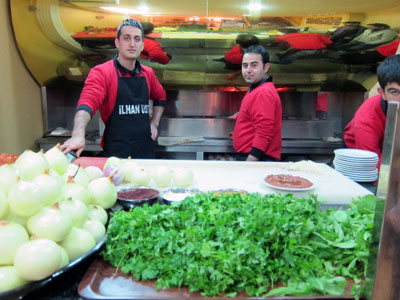 [1]
These days, along with döner kebab, Turkey’s biggest export is the soap opera. From Athens to Abu Dhabi, people are hungry for these sultry and often scandalous one-hour dramas. We, too, enjoy some good intrigue, and following the backstory of the Istanbul restaurant scene often plays out like a season finale of “The Foreign Groom [2].”

On a recent stroll down İstiklal Caddesi, we spotted the newly opened Asmalı Canım Ciğerim, featuring İlhan Usta at the grill, and smelled a story. For years, we’ve been getting our liver fix at a restaurant [3] of the same exact name just around the corner in the Asmalımescit area. So we decided to stop in for some grilled liver and gossip.

We immediately recognized a few of the old crew members standing awkwardly at a long grill with a fun-house mirror over the hood that distorted one’s body, making us all look like plump sausages. Refugees from the leafy garden of the Asmalımescit location, we stood uncomfortably in the bluish light of the new shop’s energy efficient lighting, trying to act as if nothing had changed.

It took some prodding, but eventually, the manager explained that İlhan Usta, the grill master whose name and presumably wisdom were behind the ever-tasty liver at the original spot, had had a falling-out with his old boss. The two decided to go their separate ways, İlhan Usta taking his name and the owner of the old shop keeping the liver business alive under the name Asmalı Canım Ciğerim.

As the story unraveled, we wrapped five skewers of freshly grilled liver with the contents of about a dozen small plates of bitter greens, onion with sumac and ezme. Our hands worked automatically, sliding tender, juicy liver bits off of the skewer with a handful of thin lavaş, then loading it with crisp arugula. But while the crew here seems to have transplanted the flavor of the old Canım Ciğerim, the vibe was distinctly different. Perhaps it was the absence of the “asma” (the “Asmalı” part of the name promises a vine-laden pergola), making us think of a biergarten with no garten.

Days later, we went back to the old Canım Ciğerim – the one with the garden and outdoor seating – and found the liver much as it had been before İlhan Usta’s departure. Many of the old staff seemed to have survived the schism. On a Wednesday afternoon it was bumping, business as usual.

As we polished off our liver, our thoughts strayed back to the exodus of İlhan Usta after 10 years of manning the grill at the old spot. It must have been quite a row that actually ripped the name of the place in two – one owner maintaining the pergola and the other keeping the title of İlhan Usta.

For weeks, we were still troubled by the split and where we stood on the subject. If the liver is roughly the same in quality, where did our loyalty rest: with the usta or with the place filled with warm memories?

We discussed the situation with a local vendor of pirated DVD’s, who also happeneds to be a former kebapçı. He said, “Look, Canım Ciğerim kept the same greengrocer, same butcher, same waiters. So what’s the difference? İlhan Usta is just a brand. He’s not sitting at the grill, you know.”

We found peace in this former grill man’s insight. Once a successful kitchen is set up, it doesn’t require the grand master of liver to keep it going. On the contrary, it would take the determination of a new boss to ruin that kitchen. So, in the end, we didn’t have to take sides in the battle for Canım Ciğerim. We remain loyal only to good liver, wherever it may be found.