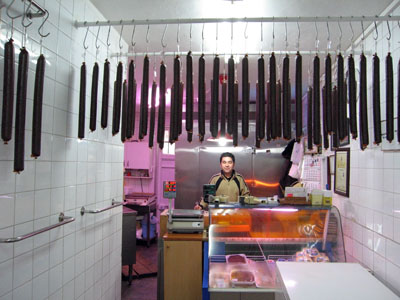 [1]
Dear Istanbul Eats,
For an upcoming trip, I’ve been searching for Jewish restaurants in Istanbul, but without any luck. I thought I would turn to a higher authority and ask what you can suggest? Thank you,
N. Osher, Bethesda, Maryland

While Istanbul has a sizable Jewish community (perhaps some 20,000) with a long and rich history in the city, finding traditional Jewish food (kosher or not) is not so easy. Visitors to Rome, for example, can go to the city’s historic ghetto and find several restaurants and bakeries serving typical Roman Jewish food, but Istanbul doesn’t have something equivalent.

In fact, the city has only one Jewish eatery: Levi, a small restaurant tucked inside a historic han in the Eminönü district (and one of the stops along our “Culinary Secrets of the Old City” food walk [2]). Opened several decades ago by its namesake, the restaurant today is run by Mr. Levi’s Muslim apprentice and serves up a daily mix of traditional Sephardic Jewish dishes (certified kosher by the Turkish Rabbinate). We’ve had some good things to eat there and some not so exciting. Perhaps because they have a monopoly, the restaurant’s owners seem to indulge in price inflation for tourists, so be prepared to pay more than you would expect for the food.

The Rabbinate’s website also has a page called “Eating Kosher in Istanbul [3],” which lists Levi and also some of the city’s Jewish old-age homes, whose kitchens run a thriving side business doing event catering. Actually, some of the tastiest Turkish Jewish cooking that we’ve tasted has been at events catered by these kitchens. So, if you’re really interested in tasting traditional Sephardic food, you may want to get in touch with one of these places and see how small of an “event” they are willing to cater.

And if you want to do some of your own “self-catering,” Istanbul has several kosher butcher shops, were you can buy salami, sucuk and other cold cuts. A list of them can be found here [4].