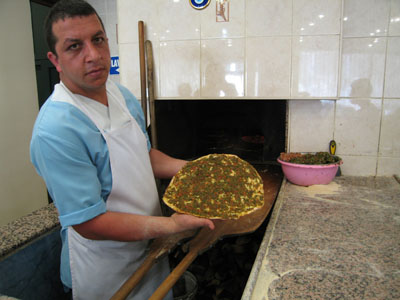 [1]
(Editor’s Note: A recent article [2] about a spat between Turkey and Greek Cyprus over who owns the rights to claim lahmacun as their own got us thinking about those minced-meat covered discs of dough and how, when done right, they really are something worth fighting over. So, prompted by the Turkish-Cypriot food fight, we’ve decided to officially declare this week “Lahmacun Week in Istanbul,” where we’ll be looking at five of our undisputed favorite spots in town to get a taste of how the contested savory delight should be made. Today’s post takes a look at Öz Kilis, a spot on a Fatih backstreet serving lahmacun (and kebab) as its made in southeastern Turkish city of Kilis.)

In Turkish popular lore, the denizens of Kilis, a town in southeastern Turkey right near the Syrian border, are known for several things: kebab and lahmacun making and smuggling. We haven’t been to Kilis, so we can’t vouch for the smuggling bit. But we did recently have lunch at Öz Kilis, a wonderful little spot on a quiet back street in the Fatih neighborhood run by two Kilis natives, and can report that the kebab and lahmacun making reputation is well deserved. (Click here [3] for the rest of the review)