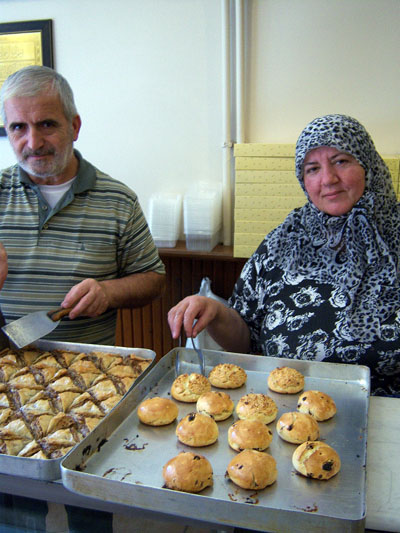 [1]
(Editor’s Note: This guest post was written by “Meliz,” an intrepid explorer of Sultanahmet’s culinary backstreets who would like to keep her anonymity.)

There is a quiet grace in doing one thing, but doing it very well.

Or, maybe, two things. Like, say, börek and baklava.

This is what distinguishes Rumeli, a tiny place a block or two from the Hippodrome in the Sultanahmet neighborhood. Do not be discouraged by the barren display cases, the sparsely filled trays in the window, the solemn ranks of unrefrigerated Çamlıca bottles. As noted previously on this site, in Istanbul, most often, quality of food is in direct inverse proportion to fanciness of décor. This holds true in Sultanahmet, as well.

The key with Rumeli is to make it your first early-morning stop, before powering your way through the glory that is Sultanahmet. Why? Because Nilgül Hanım makes the day’s batch of börek once, every morning, and it is invariably gone by noon. There might be a spare poğaca sitting around, looking lonely, but for börek, one must arrive early.

And it is worth the trouble. This is the börek your Turkish friends have told you about – the kind of börek usually reserved for those lucky children whose aunties or mothers loved them too much, and had time to spare to make fresh yufka (the Turkish version of phyllo dough). At Rumeli, I finally understood the glossy-eyed insistence of friends who had tried for years, against overwhelming evidence to the contrary (from freezer-aisle yufka to franchised börek salons), to convince me that börek could be one of the great pleasures of life. For the uninitiated, Rumeli validates the special place börek has in the hearts of the citizens of Turkey: buttery, hand-rolled yufka, rolled around a generous but not excessive amount of spinach, cheese or meat, everything prepared from scratch that morning.

Then there is the baklava.

This is not the photogenic, overbred, golden-fluffy baklava of the guidebooks. At Rumeli, you will get homemade walnut (never pistachio, ever) baklava that is, let’s just say, pretty on the inside. By which I mean delicious. The pastry is crispy on top, overstuffed with walnuts, and the syrup-soaked layers on the bottom never have time to turn into the chewy wad that one sometimes gets with mass-produced baklava. Rumeli baklava is so special that it is accepted currency among many in the bazaar (especially for payment of debts incurred over backgammon or pişti). HINT: if you do not see any baklava, ask. It may be cooling out back, in which case you are in for an extra-special treat, as their baklava is obscenely good when fresh. As for timing, with the baklava, get there before 3:00.

So, how best to enjoy Rumlei’s börek or baklava?

Sultanahmet is chock-full of public benches in stunning locations – none of which truly offer the chance to sit and enjoy oneself in uninterrupted peace. That said, if you do not mind a little unsolicited conversation, nothing beats the view from a Sultanahmet park bench on a sunny day. BUT: If the thought of that unsolicited conversation makes you grind your teeth, Rumeli does have a few tables, inside and out. I recommend that you sit inside, where you get to follow the banter between Eşref Bey and his wife Nilgül Hanım – he is deaf, she is formidable – and interactions between Eşref Bey and the various and sundry regulars darting in for their treats.