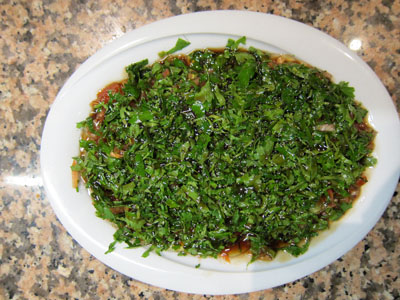 [1]
By collecting recipes [2] from our favorite places around town and attempting them in our own kitchen, we’ve figured out one of the best-kept secrets of the Turkish kitchen – namely, that fresh, local produce and a lot of love go a long way. In the case of Zübeyir’s [3] Gavurdağı Salatası – a piquant and utterly fresh-tasting parsley and tomato salad – a little pomegranate molasses is also necessary. A bottle of this, procured from most Turkish or Middle Eastern food shops, will likely become a staple in your salad dressing.

Serves 4 as a side salad.

Finely chop the tomatoes, peppers, onions and parsley. Set parsley aside. Mix tomatoes, peppers and onions with spices. Plate the mixture, then lay parsley in a thick layer over the chopped vegetables before drizzling olive oil and pomegranate extract over top.

Note: Zübeyir Usta’s recipe is not precise on the amount of olive oil and extract, but the ratio is 1/1 “until the salad is wet.”

Note: Sometimes this salad is served with crushed walnuts on top, but not at Zübeyir.